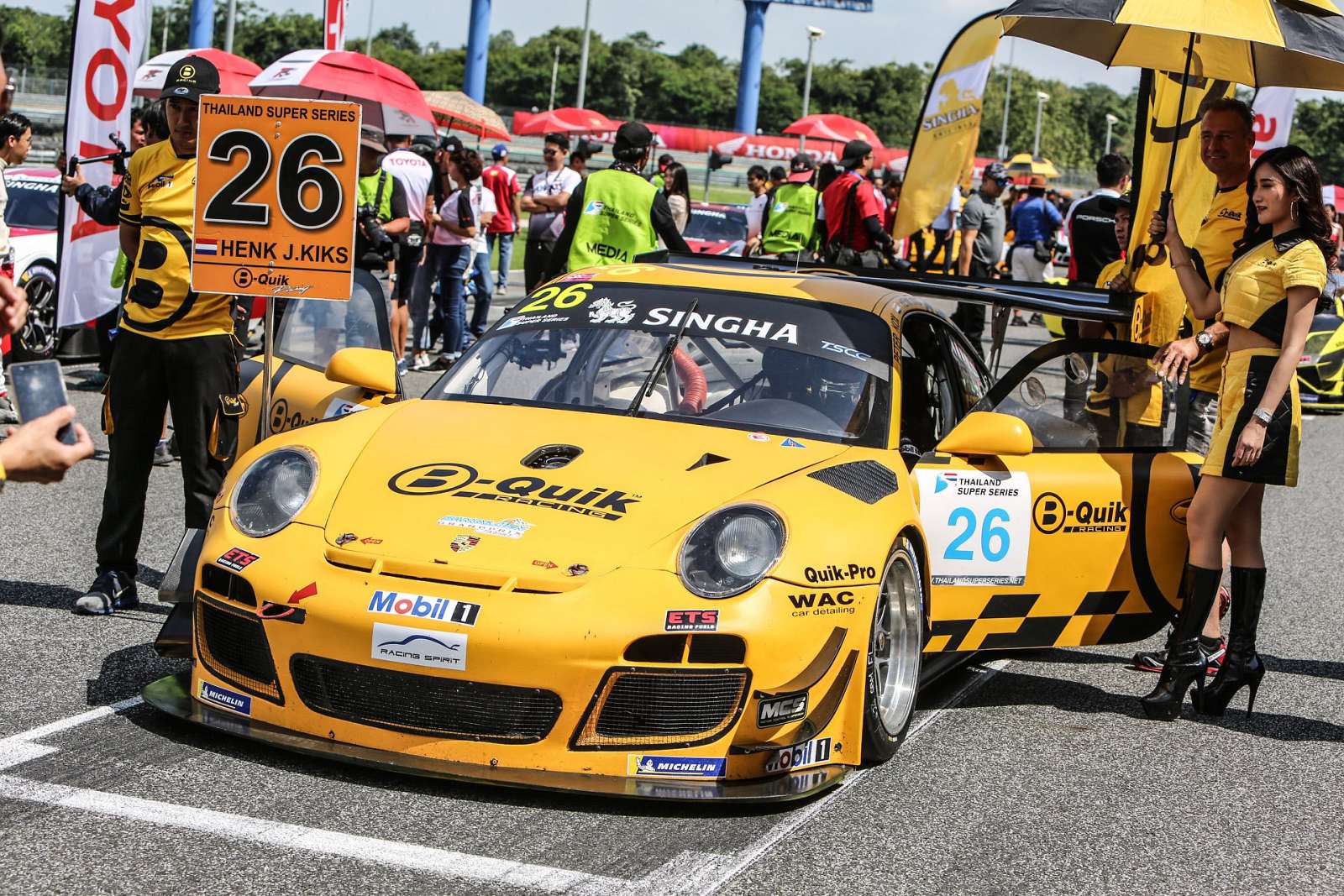 B-Quik Racing Co. Ltd. TM (“B-Quik Racing”) signed off Thailand Super Series (“TSS”) 2018 in real style with a superb weekend in Buriram that netted us two championship titles, race wins and podiums. We achieved all our objectives for the weekend – and on top of that there was plenty more icing on the cake. All our drivers performed superbly and the majority of them took a deserved trip to the podium.

Our core objective of the weekend was to secure the Drivers’ and Teams’ titles in Super Car GTM. We arrived at Chang International Circuit holding a slender lead in both championships but with four other drivers also in the reckoning for the Drivers’ crown while in the Teams’ rankings we would be going head-to-head for glory with the factory Toyotas.

Will, meanwhile, had maybe over read the job sheet, he certainly “supported” us to the max – by winning the race! That was his first win in Super Car and his first in our black and yellow colours.

In Race 2 – with the pressure heaped high on his shoulders – Alif however took it all in his stride, knuckled down and showed exactly why he has a longstanding reputation as a tenacious, winning driver. The Malaysian finished P2, doing exactly what he had to do as the car ahead wasn’t involved in the title hunt, to secure the Drivers’ title.

In Super Car GTM Plus there was a podium finish for each of our cars. Rahel Frey was back with us for a second time to partner Daniel Bilski in the #27 Audi R8 LMS Ultra GT3 and the pair built up their speed all week. Hard work from the drivers and crew paid off with a superb P2 in Race 1. It was also the first time a lady driver had ever been on the podium in the top tier of Super Car.

In Race 2 they were heading for the podium again before a transmission problem that reared its head during the first stint when Daniel had been in the car became terminal just a few laps after he handed over to Rahel and the Audi had to be garaged.

For the other GTM Plus entry, the #26 Porsche 997 GT3-R driven Henk Kiks and Peter Kox, a podium looked to be on the cards in Race 1 before a post-race time penalty dropped them away from the rostrum positions. In Race 2 they made amends for that slip up with a fighting drive to the podium and that means our “GT3-R” signs off its three event career in black and yellow with silverware to its name.

In Super Car GTC Ian Geekie was in thoroughly imperious mood throughout the practice days and come the qualifying session he duly banged the #18 Porsche 997 GT3 Cup on pole for both races.

In Race 1 he drove superbly, having to fend off the factory Toyota snapping at his heels while at the same time being bottled up behind the slower TA2 Thailand cars which had started ahead on the split grid but with their superior horsepower it was almost impossible to make a pass on stick. Ian led from lights to flag but agonisingly he was slapped with a 30 second time penalty afterwards and dropped down to P6.

Come Race 2 and Ian just did it all over again leading from pole to chequered flag while managing the cars in front and behind. Inch perfect work from the experienced Australian all weekend to claim his first win in Super Car GTC and our first win in this category – while signing off our “997” programme in real style.

The young drivers also delivered. In TA2 Thailand Narin Naeosathon missed most of the pre-race practice with transmission problems that side lined the #26 Camaro but come the competitive action he got on the pace quickly although incidents dropped him out of the races. His highlight was running P4 and fighting for P3 in Race 2 before a spin into the final turn during the closing laps neutered his charge.

After his win in the previous round of “Toyota Motorsport” in Phuket last month, the “one make” series was back to Buriram for its final round and Jerasak Kongplab was again driving our #126 Toyota Vios in the “Division 2” category of the “Vios Cup”. He qualified P3 and finished P2 to make it two consecutive visits to the podium. Also, in the thick of the action in Buriram were Adisak Tangphuncharoen and Pongtanu Kamsai – respectively driving the #26 and #25 Honda Brio – in Super Eco.

Now the team quickly turns its attention to the final round of the Audi Sport R8 LMS Cup, which takes place in Sepang next month, where Daniel and Henk will be driving. Also, on the same weekend programme our young drivers will be racing in the Sepang 1000 km.