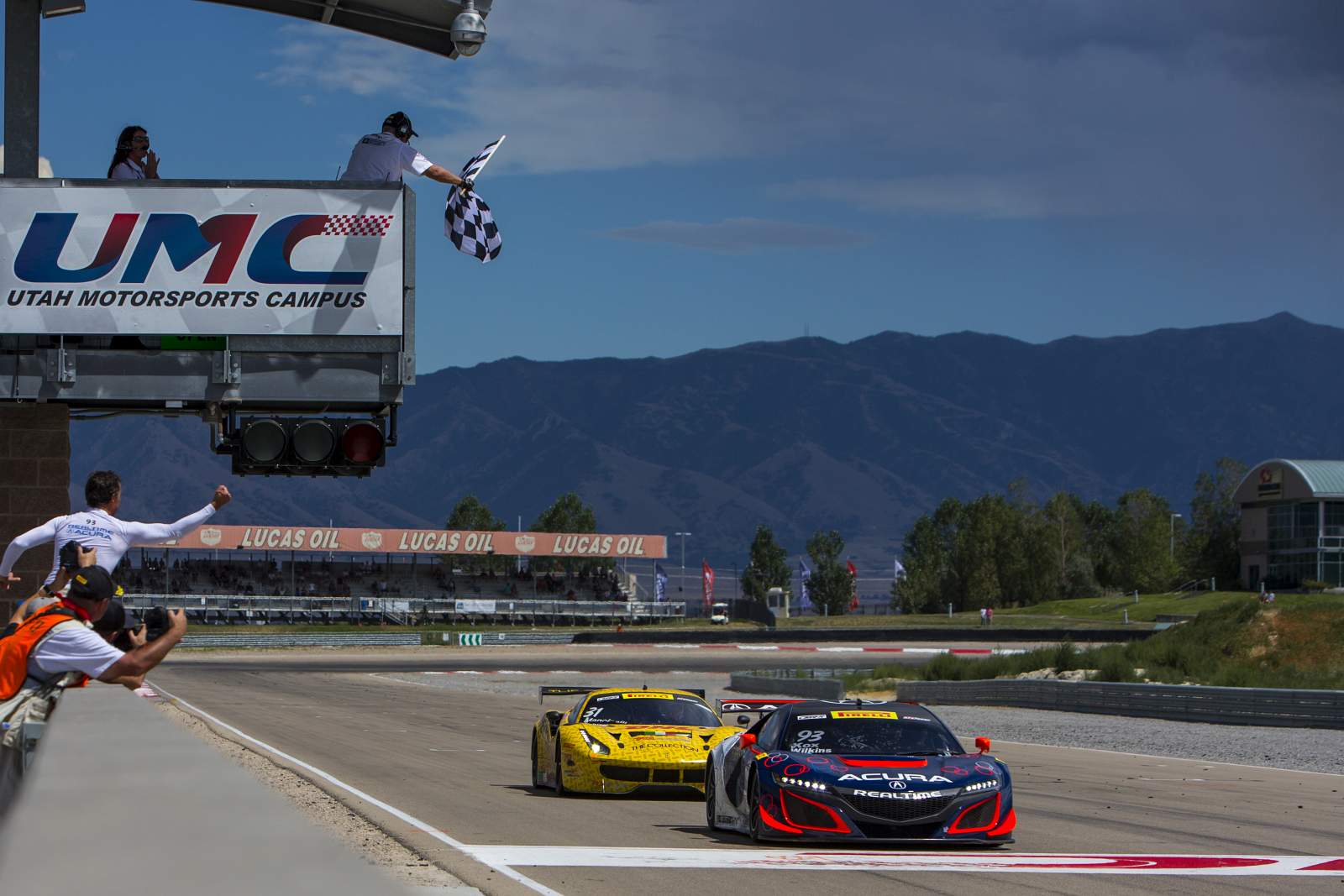 TOOELE, Utah (August 12, 2017) – Peter Kox and Mark Wilkins combined to score the first win for the new Acura NSX GT3 in Pirelli World Challenge Competition in a hard-fought SprintX opening round of a doubleheader race weekend at Utah Motorsports Campus.

Starting from the pole, Kox led the opening segment of the hour-long contest, but the #93 RealTime Racing Acura slipped to second behind the Ferrari of Daniel Mancinelli and Niccolo Schiro during the mid-race round of pit stops.  But a quick half-spin by Schiro saw Wilkins move the Acura back into the lead as the race hit the 40-minute mark.

Wilkins and Schiro continued to battle through the closing laps, but the Ferrari was never able to complete a pass, and Wilkins took his Acura to the checkers by 0.228-seconds.

“This feels wonderful. It was quite [close] at the end, but the Acura performed really well,” Kox said at the finish. “I had a good start, and I just concentrated on my own race and tried to conserve the car as well as I could for Mark [Wilkins], so he had a good car to finish it off. We lost some time in the pit stop, but luckily it fell back into our hands, Mark withstood the pressure and we have a fantastic result.”

Wilkins recounted the closing laps. “I just thought ‘one corner at a time and get the most out of the car’. We did that today. Peter did a great job in qualifying and he put us in a position to get this win and did a great job in his drive and handed over a clean car at the front. I was looking forward to the white flag [indicating the start of the final lap]. I knew I could just plug away and not make any mistakes. I think we capitalized on that. I was a bit nervous, to be honest. I just wanted to stay out of trouble and do the best job I could. It’s great to get the first victory in World Challenge for the NSX GT3. It feels fantastic. Thanks to Peter [Cunningham, team owner] and RealTime for the opportunity.”

The win is the first for the new NSX GT3 in the Pirelli World Challenge, and the third for Acura in its inaugural year of international GT3 competition. In addition to today’s victory, Michael Shank Racing has scored two endurance-race wins in the IMSA WeatherTech SportsCar Championship with drivers Andy Lally and Katherine Legge.

In the second #43 RealTime Racing NSX GT3, Ryan Eversley started fourth and soon began a long battle with the Porsche of Pat Long, eventually gaining third place.  However, a delay during the driver change at the single pit stop resulted in co-driver Tom Dyer resuming in fifth.  While he was able to regain much of the ground lost during the long pit stop, Dyer was unable to improve his position in the closing laps and finished fifth.

“One of the belts got trapped behind me in the seat. It was unfortunate,” Dyer said of the long pit stop. “We were fighting a little bit of understeer, and it kept growing. I was concerned about the left front tire, too. It was feeling a little odd, but everything made it to the finish.”

“The RealTime guys brought two really good race cars. We were fast in every session and we knew we’d be strong,” Eversley said. “The biggest thing about today is the Acura NSX GT3 has now won in the IMSA series and in World Challenge.  Hopefully, people will want to buy these cars and race them next year. We’re all really happy at RealTime to get the win, and we’ll try it again tomorrow.”

“After our first official on track session [here] one year ago, it came full circle today.  The NSX GT3 has now shown it can race for the win in both endurance and sprint racing,” said NSX GT3 Project Leader Lee Niffenegger of Honda Performance Development.  “Huge congratulations to everyone at RealTime Racing and our Acura Motorsports engineers for all the hard work to get to this point.  Peter had a great lap in qualifying to secure the first World Challenge pole for the NSX GT3, and held P1 throughout his stint.  Mark then delivered a cool and calm performance to hold off the charging Ferrari to take our first World Challenge win.  The first one is always the hardest, and now we can try for more as the season continues.”

The RealTime Racing Acura NSX GT3 team will have only a short time to savor today’s victory, as the second round of the weekend doubleheader takes place tomorrow at Utah Motorsports Campus in Tooele, Utah.

The Acura NSX GT3 racecar utilizes the production NSX’s lightweight multi-material body with aluminum-intensive space frame, and is powered by a 3.5-liter, 75-degree, twin-turbocharged DOHC V-6 engine. The engine uses the same design specifications as the production 2017 Acura NSX, including the block, heads, valve train, crankshaft, pistons and dry-sump lubrication system. The engine is paired with a 6-speed, sequential-shift racing gearbox, delivering power to the rear wheels. The Acura NSX is produced at the Performance Manufacturing Center in Ohio.

Video recaps from this weekend’s Acura Pirelli World Challenge racing activities at the Utah Motorsports Campus are being posted on the "Honda Racing/HPD" YouTube channel.  Produced by the Carolinas Production Group, the video packages can be found in the 2017 HPD Trackside Video Playlist at: https://www.youtube.com/HondaRacingHPDTV.