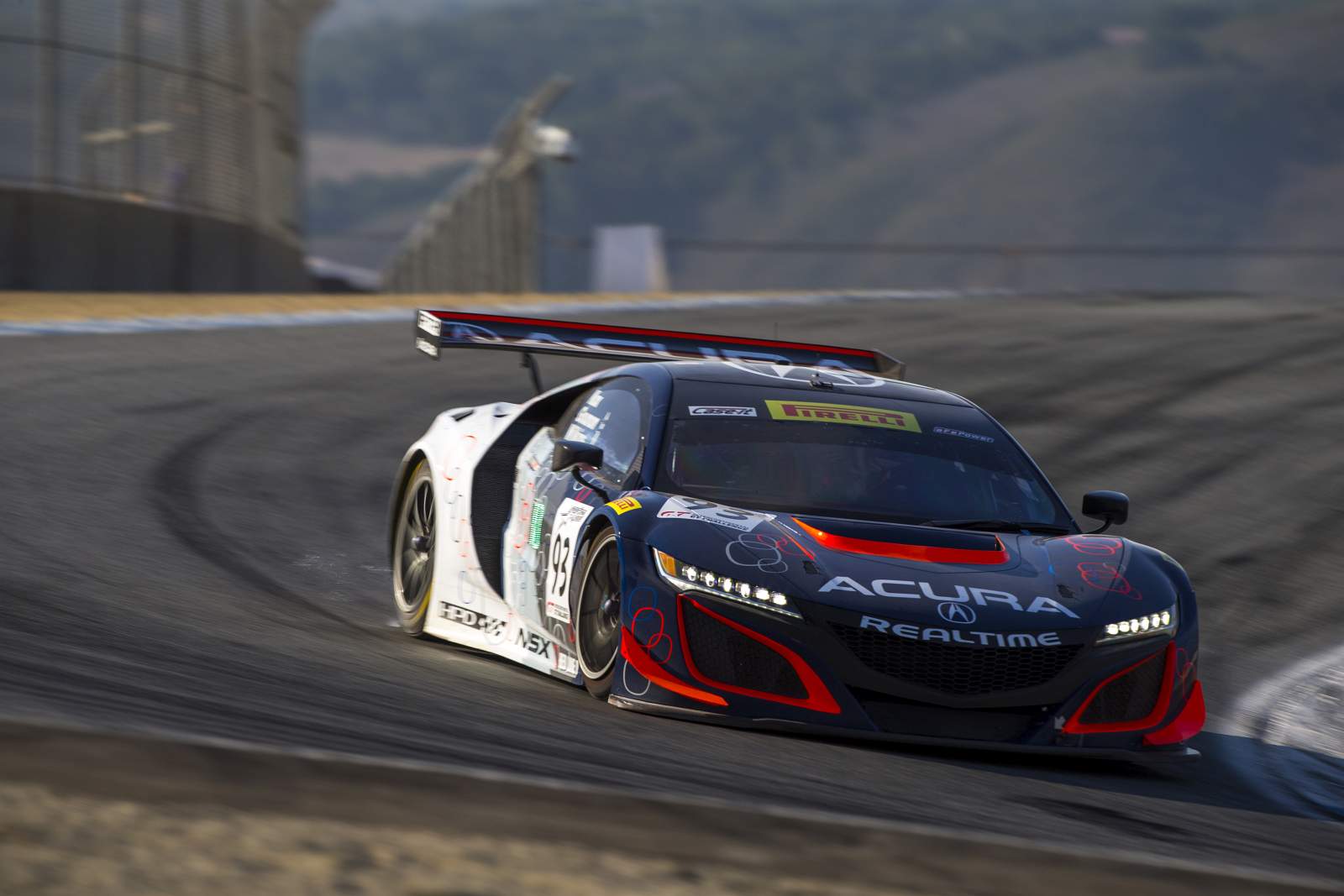 RealTime entered its No. 43 and No. 93 Acura/HPD/RealTime Acura NSX GT3s from Pirelli World Challenge competition into the inaugural eight-hour event in Monterey—the longest race ever to take place at the 2.238-mile circuit. The No. 43 was shared by Ryan Eversley, Tom Dyer and Dane Cameron, while the No. 93 was piloted by Peter Kox, Mark Wilkins and Jules Gounon.

Both drivers picked up positions in the opening laps, but there was bad news early on; the No. 93 began to overheat in the first hour with Kox at the wheel. It required a return to the paddock. However, once the crew got a better look at the problem, it was deemed terminal and the car was retired within the first hour.

“I think we had a really good car,” Kox said. “The Acura was performing really well. I’m disappointed for the whole RealTime Acura crew and everyone at HPD. We’ve worked so hard and been very reliable and I still feel like this is a reliable car. It was a complete surprise and a shame at the last race of the year.”

It was during Eversley’s second stint that the second full-course caution of the race came out. Some confusion with the safety car set the No. 43 back a lap before the restart.

“The safety car picked up the wrong car on track and that ended up putting us a lap down,” Eversley said. “The Series didn’t want to do anything about it, which is a bummer, because they took away a lap from us.”

Fortunately, the team was able to get the lap back during the next caution period and was back up to fifth.

The final set back was a drive-through penalty for a pit stop infraction that once again put the No. 43 a lap down.

Despite this setback, in the final hour of the race, Cameron picked up one more position and took the checkered flag in fourth.

“It was a good, solid day,” Cameron said. “We’re a little disappointed. I think we should have been there, fighting at the end, for a podium. P4 after a messy day with some of the safety cars and going a lap down, not on our own doing, put us a little bit on the back foot. The team did a great job recovering and P4 is pretty solid.”

Even though the team had not done full pit stops with driver changes since 2010, RealTime was nearly perfect on pitlane.

“RTR stepped up, equipped themselves properly, practiced, and the pit stops were flawless,” Dyer said. “The team never skipped a beat. The only beat skipped was a minor mistake; not turning off the car in the pit stop, which was me trying to get out of the car quick, not them. All in all I thought we did a good job.”

Although the team was disappointed to miss the podium, a fourth-place finish amongst endurance racing regulars and World Challenge champions, was a strong way to end the 2017 race season.

“It was pretty cool to race in the longest race that Laguna Seca has ever had,” Eversley said. “I can’t thank RealTime, Honda/HPD and everybody at Acura enough for a great season. I’m happy to end it with a top-five result. We’re racing against the best guys in the world of GT3 cars. To finish right behind a World Challenge championship-winning team, to beat Wright Motorsports and their Porsche factory drivers and to be up front with that pack all day was kind of neat and I’m happy to be a part of it.”

RealTime Acura will head back to Wisconsin for the off-season and begin preparations for next year. Stay tuned for news on what the team will be up to in 2018.