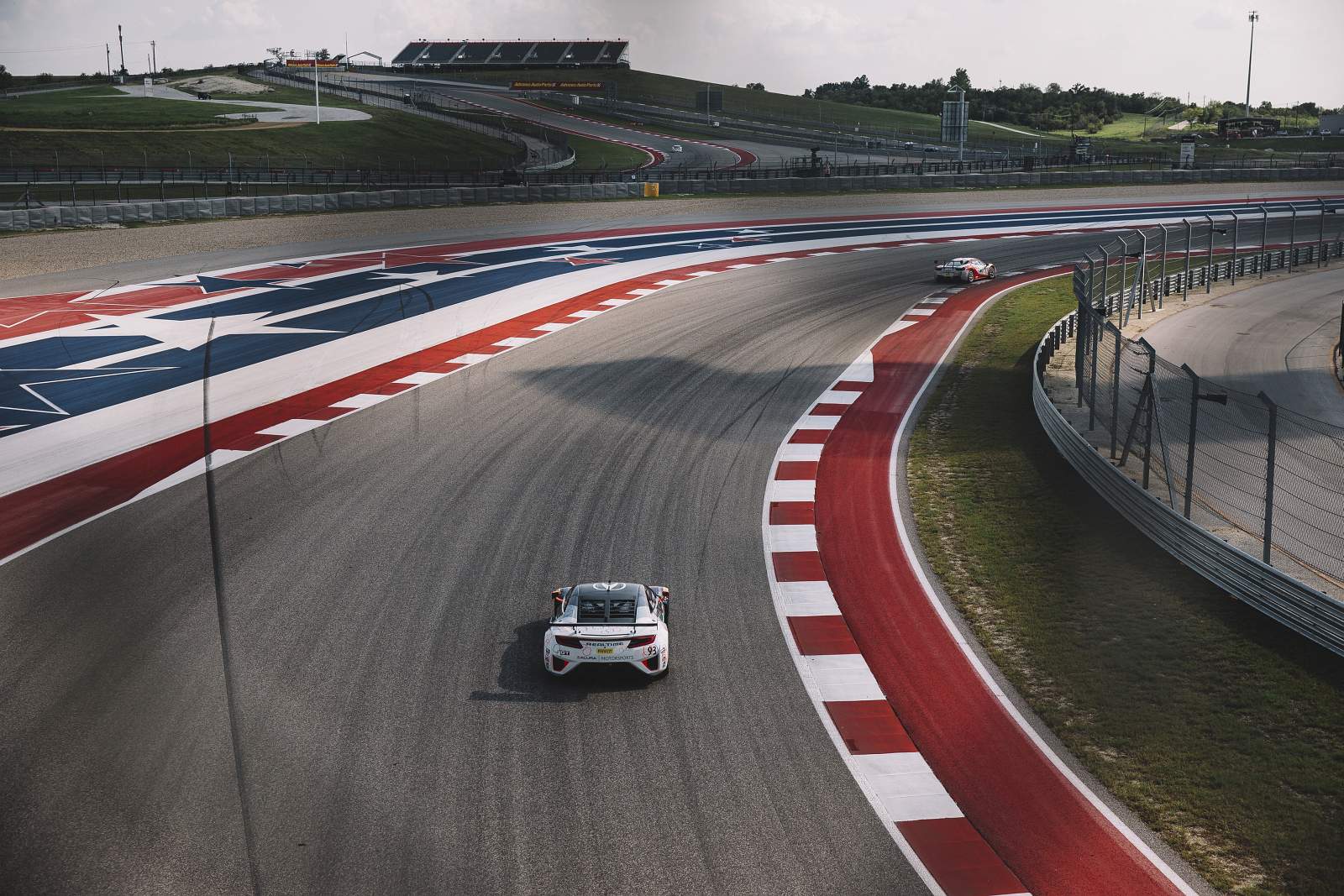 AUSTIN, Texas (Sept. 7, 2017) – RealTime Acura had a Texas-sized race weekend at Circuit of the Americas (COTA) in Austin, taking part in three Pirelli World Challenge Sprint-X races. Both Acura NSX GT3 entries made steady progress over the trio of races and collected five top-10 finishes in the Lone Star State.

Though a standard Sprint-X weekend consists of a two 60-minute races, a third was added to makeup for a rained-out race at Canadian Tire Motorsport Park in May. To accommodate the extra race in the COTA schedule, it was run on Friday evening.

As with all the other Sprint-X rounds, Ryan Eversley was joined by Tom Dyer in the No. 43 Acura/HPD/RealTime Acura NSX GT3 and Peter Kox partnered with Mark Wilkins in the No. 93.

FRIDAY – CTMP Make Up Race
The grid for the makeup race simply carried over from the one that was rained out. This meant Dyer started 11th and Kox started 15th.

Kox’s race was quickly derailed when the hood of his NSX came flying off the car on the opening lap. The team attempted to continue minus the hood, but without the proper air channels, the engine began to overheat and the decision was made to park it.

Dyer was having a clean opening stint when contact with another car caused him to spin.

“I got hit and spun by an overzealous competitor,” Dyer said. “Ultimately, it didn’t kill us, but it’s never a good thing. It didn’t damage anything, but it lost us a bunch of time.”

Eversley hopped in for the closing stint and brought the No. 43 home in ninth.

“Bryan Sellers and I had a good scrap for a bunch of laps until he finally got by me, but it was a lot of fun,” Eversley said. “Racing at night at COTA is probably the most fun I’ve had there in a while.”

SATURDAY – Qualifying
Qualifying for the final two rounds of the Sprint-X Championship took place mid-day on Saturday in the blazing Texas heat. Eversley was able to crack into the top 10 on the grid with a ninth-place starting position. Kox, meanwhile, qualified his NSX in 14th.

SATURDAY – Race One
A short three hours after qualifying it was time to start round nine of the Sprint-X Championship.

Eversley had a tremendous start and was able to work his way up to sixth before it was time to hand the car over to Dyer.

The No. 43 driver change from Eversley to Dyer was rapid, but the officials deemed it too rapid and hit the team with a drive-through penalty for missing the pit stop delta by 0.044-second.

“I think we were sixth after the pit stop and we were in a nice spot, track position wise, where we didn’t have a lot of pressure from behind,” Dyer recalled. “We figured if we could ride it out, it’d be a nice step forward from the Friday race. Then we got the call that we received a drive-through penalty for the miniscule pit-lane delta infraction.”

Undeterred, Dyer kept his head down through a late-race re-start from caution and climbed back to ninth by the checkered flag.

“Peter did a great job in his stint staying out of trouble,” Wilkins said. “Things got a little chaotic, but he had a really good opening stint and we had a strong driver change. We were on the money on that. We came out in a good position and stayed there.”

SUNDAY – Race Two
Grid positions for Sunday’s race were set by each car’s fastest race lap from Saturday. As a result, Dyer lined the No. 43 up in 14th and Wilkins started the No. 93 in 16th.

Dyer had a fantastic start and successfully avoided a Ferrari versus Cadillac collision in Turn Two. He was all the way up to seventh when the full-course yellow flags came out.

“There was drama going into Turn Two,” Dyer said. “I’d like to say I was good, but I was probably lucky. Things opened up in a way that I was able to pick my spot and get through with no contact and gain quite a few spots.”

Wilkins had a much closer call with the accident, but was able to advance to 13th.

“We were in the wrong spot,” Wilkins explained. “I had to avoid a spinning Cadillac and to do that I had to get pretty hard on the brakes. I lost a bunch of spots trying to get through there cleanly, which I did.”

After three laps under caution, green flag racing resumed and Dyer was immediately coming under attack. Though he lost a few positions initially, he took them back and waited longer than most to pit. When he finally brought the No. 43 onto pitlane, he was fourth.

Wilkins was able to pick up two more positions before the driver change and also waited until later in the pit window to come in. He handed the No. 93 over to Kox in 11th.  A flawless pit stop and good track position helped Kox moved up to eighth by the time pit stops were complete, one spot behind teammate Eversley.

“Right before Tom came in, he got hit by the same Porsche that spun us on Friday,” Eversley said. “It did some damage to the left rear of the car, but at the time everything felt fine.  After a couple laps, I started to get a vibration on the back straightaway. The faster I went in a straight line, the worse it got, so that was pretty nerve wracking.”

Eversley and Kox were on their own for most of their stints, until the No. 3 Cadillac driven by Ricky Taylor spun on his own, promoting Eversley to sixth and Kox to seventh.  There was just enough time left in the race for the Cadillac to recover and catch Kox, putting him back to eighth, but not enough time to catch Eversley who crossed the line in sixth, just before his left-rear went flat from the bodywork rubbing against the tire.

“The RealTime crew was awesome with their ‘never say die’ attitude in the high temps, on a very trying weekend, especially coming off our breakthrough weekend the event prior. Everyone kept digging and trying to find more and I think we punched above our weight quite well this weekend.”

Sunday’s race closed out the 2017 Sprint-X calendar. RealTime concluded its first foray into Sprint-X seventh in the championship points. Eversley and Dyer ended up ninth in the final standings and Kox and Wilkins were 12th.

The Pirelli World Challenge Sprint-X races from Circuit of the Americas will air on CBS Sports Network, Sunday, September 10, at 3:30pm.

Up next for RealTime Racing is the final two rounds of the Pirelli World Challenge GT Championship at Sonoma Raceway, September 15 – 17. Both races will be streamed live on world-challenge.com.