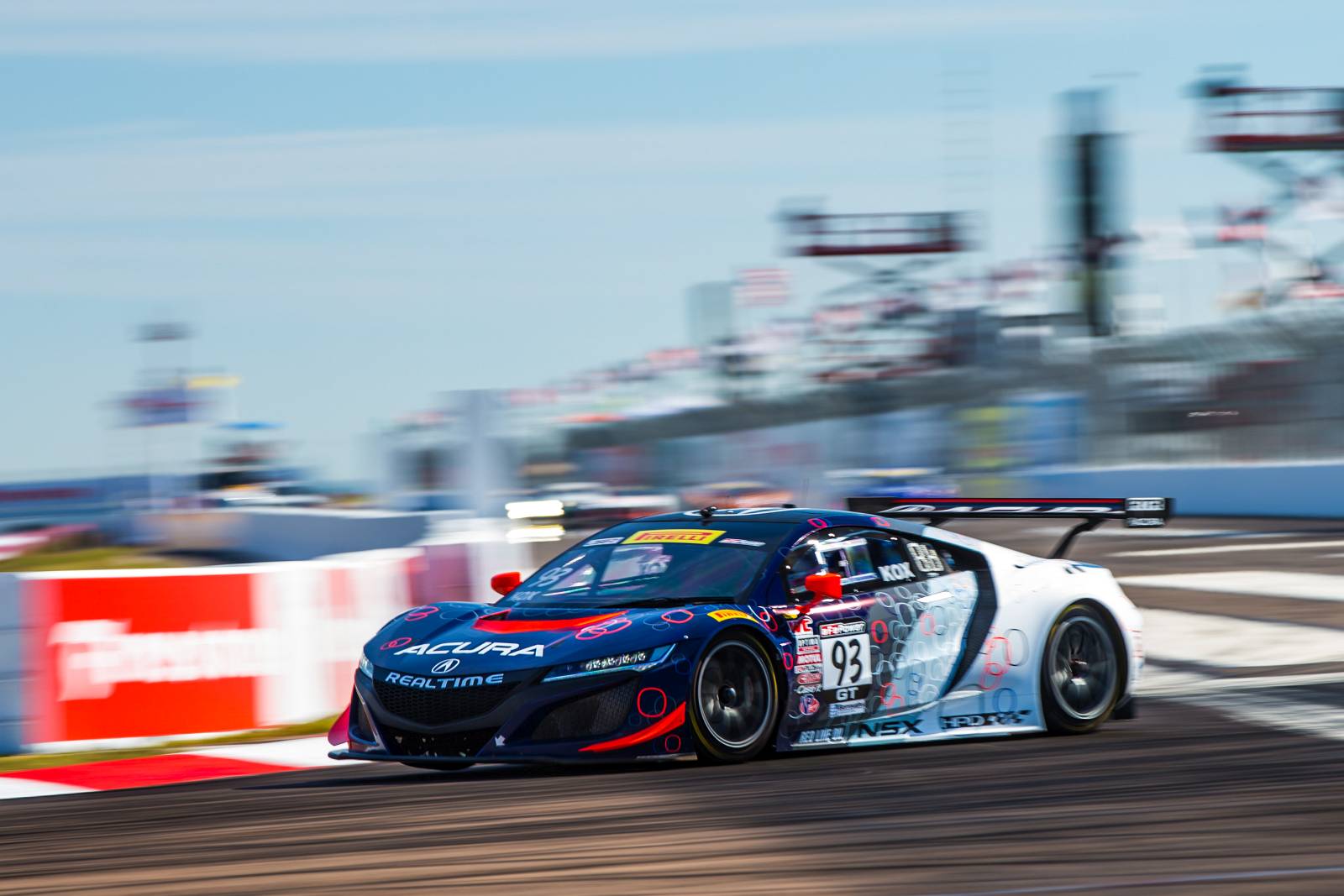 ST. PETERSBURG, Fla. (March 13, 2017) – The RealTime Acura NSX GT3 made its Pirelli World Challenge debut on the streets and airport runways of St. Petersburg, Florida, for the series’ season opener. Drivers Ryan Eversley and Peter Kox each faced their own setbacks, but both came away with strong top-10 finishes.

The RealTime crew was put to the test even before qualifying, when Eversley made contact with the wall in his No. 43 Acura/HPD/RealTime Acura NSX GT3 during practice. The damage was significant and it was ‘all hands on deck,’ to get the car ready for Saturday morning’s race. As a result, Eversley missed qualifying, which put him at the back of the grid.

In his first time at the St. Petersburg temporary street circuit, Kox qualified his No. 93 Acura/HPD/RealTime Acura NSX GT3 14th for Saturday’s race.

“I’ve raced at street circuits in my career and they’re all a little bit the same: you can’t make a mistake or you’ll write-off the car,” Kox said. “It was a steep learning curve because we could not run a lot of laps in practice due to red flags. I had to learn quickly, but I think in the end we did okay. A red flag came out on my good lap, but that’s just how it is sometimes.”

Both Eversley and Kox had fantastic opening laps in Saturday’s race. Kox was up to 11th and Eversley to 17th before a full-course caution was issued on lap four.

Shortly after racing resumed, Eversley could feel something was amiss with his car. Concerned about a possible tire going down, he took his Acura to pit lane.

“Initially the car felt really good,” Eversley recalled. “I was making my way through the GTA class. I got past almost all of them and when the car started to feel not as good. It progressively felt worse and worse in the rear. Eventually, it got to where the left rear felt like it was flat, even though the tire pressures looked good.”

The crew put a new left-rear tire on the car, but it did not resolve the issue.  Knowing he had set a race lap strong enough for a high grid position in Sunday’s race, Eversley and the team recognized the best option was to bring the car back into pit lane and call it a day.

Kox, meanwhile, worked his way up to eighth and settled in there all the way to the checkered flag.

“I had a reasonably good start,” Kox said. “We were on top of the handling and the Acura drove quite well for me. It was difficult to gain places, but I felt we had the speed to go forward. In the end, I was happy with my drive and how the car reacted. It was a good result.”

Each driver’s fastest race lap from Saturday set the grid for Sunday’s race. Before pitting, Eversley was able to set a lap good enough for seventh on the grid. Kox, mired in traffic for most of the race, turned a fast lap that put him 14th on Sunday’s GT grid.

The start was a wild one, with plenty of contact and a sideways Aston Martin. Unfortunately, Kox did not make it through unscathed. A technical issue with his car led to contact, which damaged the front of the car and broke the radiator, forcing him to retire.

“It was a shame, because I had a good start and I felt like we could have scored some solid points again,” Kox said. “All and all I’m leaving with a positive feeling and I know we can only improve and I’m quite happy about this. I enjoyed working with my new engineer and how everything at RealTime is operating.”

Eversley made it through the opening lap intact, but fell to ninth. In the middle of a Cadillac, McLaren, Mercedes, Ferrari and Aston Martin train, Eversley managed to pick up another spot to eighth. He was holding steady there when, a passing attempt ahead of him set off a chain of events that put him back to 10th at the race’s halfway mark.

A full-course caution was issued with six minutes left in the race. This set the stage for a two-lap shootout to the finish.  Eversley calmly navigated the hectic final laps and took the checkered flag in ninth.

“We put two brand-new shocks on the rear after Saturday’s race,” Eversley said. “The RealTime boys went through everything on the back of the car. We went out today and the car held-together the whole race. We didn’t have a single thing that felt bad, wrong or out of place.

“Hats off to RealTime Acura, Honda, HPD and everyone who helped us get the car back out there. I’m looking forward to Long Beach with what we learned this weekend at St. Pete. Hopefully, we can make the car even better and get it in the top five where it belongs, because nobody works harder than these RealTime guys.”

If you missed any of the Pirelli World Challenge GT action from St. Petersburg, catch it on CBS Sports Network, Saturday, March 18 at 2pm ET.

Next up for RealTime on the Pirelli World Challenge calendar is another temporary street circuit: the Grand Prix of Long Beach April 7 – 9.