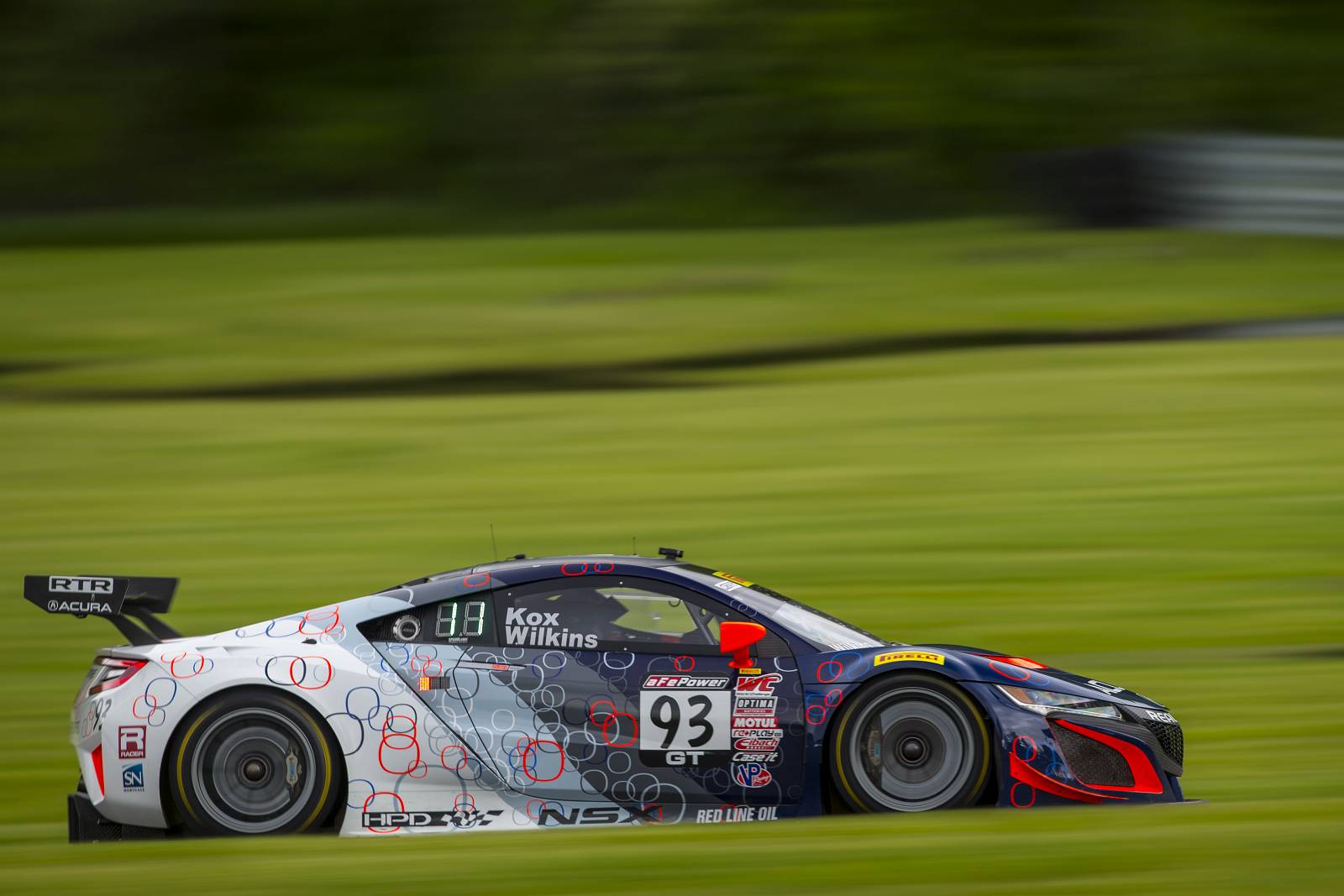 LAKEVILLE, Conn. (May 28, 2017) – RealTime Acura completed its best weekend yet in Pirelli World Challenge Sprint-X competition, scoring a pair of top-five finishes at Lime Rock Park. The Wisconsin-based squad showed its strength as a team by making Acura the only manufacturer to have two cars in the top-seven on Friday and two cars in the top-six on Saturday.

Fresh off a soggy weekend at Canadian Tire Motorsport Park, the rain seemed to follow the Pirelli World Challenge teams to Lime Rock Park in northwest Connecticut. Teams were greeted by ominous skies on Friday, which had a full variety of sessions on the schedule, including a single practice session, qualifying and a race.

The rain finally showed up moments before the Sprint-X qualifying session. It was heavy enough for officials to declare the session wet, which requires all teams to change to wet tires.

Ryan Eversley’s No. 43 Acura/HPD/RealTime Acura NSX GT3 took to the tricky track conditions beautifully. He put in his best qualifying performance of the season so far with a fourth-place grid spot.

Qualifying in 12th, Peter Kox’s No. 93 Acura NSX GT3 had a small issue that the team was able to fix before the race.

“The NSX is very confidence-inspiring in the wet,” Eversley explained. “It lets you know everything it’s doing. It doesn’t catch you off guard. It’s very driver friendly as you try to figure out where you can go fast and where you need to go slow.”

The rain subsided and several other track activities between qualifying and the race cleared a dry race line for Sprint-X teams to work with.

At the start, Eversley tried to get around Daniel Morad’s No. 2 Mercedes, but the move ended up costing him a position. He held onto fifth place until it was time for the driver change to Dyer.

“We had a really good start,” Eversley recalled. “I was able to get in a good line behind Pumpelly in the Audi. On lap four or five, the Mercedes in front of us had a big moment coming out of the chicane. Pumpelly went around him on the outside and I tried to go around him on the inside. The Mercedes went on the defensive, ended up blocking me and I almost ran right into the back of him. I had to check up and the Cadillac got around me on the outside. Then I sat on his bumper for the next 30 minutes. We definitely had a fast car but I just couldn't find a way past."

Kox worked hard to defend his 12th place spot in his opening stint and brought it onto pit lane in a strong position, so Wilkins could exit the pits up in ninth.

Shortly after the driver change, Dyer had a wild moment in Turn Five. He kept the No. 43 Acura NSX on track, but dropped to seventh.

The race’s first and only full-course caution was issued with less than 20 minutes left in the race for the No. 3 Cadillac in the tires at Turn One. The absent Cadillac immediately promoted Dyer to sixth and Wilkins to seventh.

When the race returned to green with 11 minutes left on the clock, Dyer and Wilkins were nose-to-tail. Dyer had no intention of finishing that way, however, and hunted down the No. 2 Mercedes, now driven by Ryan Dalziel. He made a textbook move for fifth with only minutes left in the race.

“Passing on the outside is always a tricky proposition, but with the way Turns One and Two are laid out at Lime Rock Park, the grip is there,” Dyer explained. “I was able to pull up alongside him under braking and hold that position through Turn One and Two and then had the preferred line going into Turn Three where I took the spot.”

Had there been more time, Wilkins likely would have had the Mercedes’ number as well, but at the checkered flag it was fifth for the No. 43 and seventh for the No. 93 Acura NSX.

“We had a strong pit stop and the car was quite good from a balance stand point,” Wilkins said. “We had a good race. I think we had better pace than the Mercedes, but ultimately, we didn’t have enough time.”

Each car’s fast race lap from Saturday set the grid for Sunday’s race. This put the No. 43 Acura NSX GT3 fifth, with Dyer behind the wheel for the start, while the No. 93 started 12th with Wilkins in the car.

A wild start saw the field heading into Turn 1 four-wide, which resulted in a full-course yellow, when several cars collided entering the corner. Dyer was able to successfully avoid the incident and move up to third. Wilkins played the start wisely as well and moved up to ninth before the yellow flags came out.

“I timed the start well,” Dyer said. “I moved over to the outside lane and followed the Cadillac through. I was battling for second with the Audi through Turn One and Two, but I had to concede that position because I couldn’t make it stick. It was nice to get up to third with a well-timed start.”

When green flag racing resumed, Dyer confidently held onto third place through his stint and kept the leaders in his sights.

After the restart, Wilkins found himself caught behind a slower Bentley. The short track length, traffic and aero wash made passing a big challenge, despite being a faster car. A smart strategy call on RealTime’s part, brought Wilkins onto pitlane early in the pit stop window to hand the car over to Kox. This got the No. 93 Acura NSX GT3 out of traffic and back on track in sixth place once all cars had cycled through their stops.

“It was frustrating trying to find a way around the Bentley,” Wilkins recalled. “Our car was stronger in quite a few places around the track, but it’s a tricky place to make a committed pass and my goal was to give Peter a clean car.”

Dyer brought his car onto pit lane several laps later to hand over to Eversley. The hand-off did not go as seamlessly as practiced, however, and when Eversley returned to the track he was in fifth.

“When I went to put the right-side lap belt into the buckle, it wouldn’t click,” Eversley explained. “It was in the slot, but it wouldn’t engage. It eventually clicked in, but by then we were behind. It was enough for the McLaren and a Bentley to get by us, so I had to run those guys down.”

Eversley quickly reeled in the fourth-place Bentley and with 10 minutes to go, he was all over the No. 88’s rear bumper. The battle became the best show on the track as Eversley tried everything he could to get around the Bentley while weaving through slower traffic.

Teammate Kox had the best seat in the house for the show, since he was right on Eversley’s tail in sixth.

“I told the team I would back him up, because I don’t think it would be right, to fight for that position with so little time left in the race,” Kox said. “If it would have been a longer race, then maybe we would have considered changing places, but with only 10 laps left, I told the team I will not attack, because then Ryan could concentrate on getting the Bentley. That was my goal.”

In the end, Eversley ran out of laps to make the pass happen, but collected another top-five finish, with Kox crossing the line in sixth.

The RealTime Acura team gets a couple weeks off before heading to their home track, Road America, for the fourth and fifth rounds of the GT Sprint Championship (one driver per car). Both the Saturday, June 24 and Sunday, June 25 races will be streamed live on world-challenge.com.