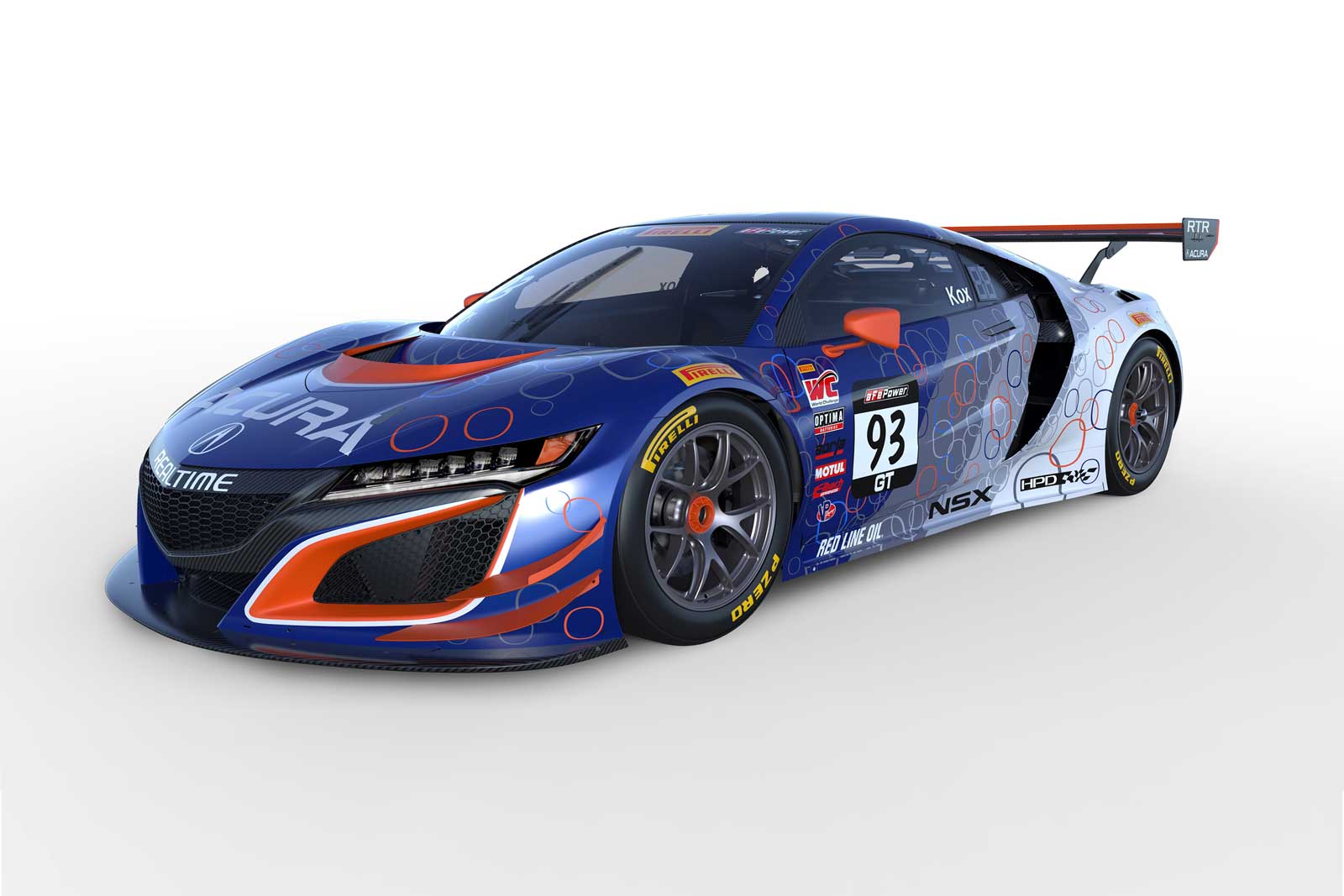 TORRANCE, CA (March 1, 2017) – Unveiled today, the RealTime Racing liveries in the 2017 Pirelli World Challenge will feature an exciting combination of the team’s traditional blue, white and orange colors for the team’s pair of cars – including RTR’s signature “squircles” – in a mirror-image pattern common to both Acura Motorsports NSX GT3 racing efforts this year.

The work of Acura Executive Creative Director Dave Marek – who was also responsible for the striking liveries on the Acura NSX GT3s being campaigned by Michael Shank Racing in the WeatherTech SportsCar Championship – the 2017 Pirelli World Challenge Acuras are an updated take on the iconic RealTime Racing design first seen on the Acura TLX GT.

Three-time Pirelli World Challenge race winner Ryan Eversley returns to RTR at the wheel of the #43 Acura NSX GT3, which will feature a white nose, transitioning through shades of grey to dark blue at the rear.

Joining the team full-time in 2017 will be Dutch racing veteran Peter Kox, the original development driver for the Acura NSX GT3.  His #93 entry will feature a reverse color pattern, with a dark blue nose leading to white at the back of the car.

Both cars will feature the RTR “squircles” – orange, blue and grey ovals scattered throughout the bodywork, first featured on the team’s Acura TLX GTs from 2014-16.  Splashes of orange, a feature of all Acura Motorsports racing machines since the 1990s, complete the livery.

“Our fans greeted the Michael Shank Racing Acura NSX GT3s with great enthusiasm, and we think they’ll be equally thrilled with both the looks and performance of the RealTime Racing cars in this year’s Pirelli World Challenge,” said Art St. Cyr, president of Honda Performance Development, which includes the Acura Motorsports efforts.  “Now we have two iconic liveries in two series representing Acura Precision Crafted Performance.  We look forward to building on our history of success with RealTime Racing in 2017, and building on our strong start in IMSA with Michael Shank Racing.”

Added to the RealTime driving lineup for the Sprint-X rounds will be Acura NSX GT3 endurance racers Mark Wilkins and Tom Dyer.  The pair will combine its RTR duties in the longer-distance Pirelli World Challenge races with the North American Endurance Championship rounds of the WeatherTech SportsCar Championship, driving for the Michael Shank Racing team.

The 2017 Pirelli World Challenge opens March 10-12 at the Grand Prix of St. Petersburg, Florida, scene of Eversley’s debut GT win for Acura in 2015. 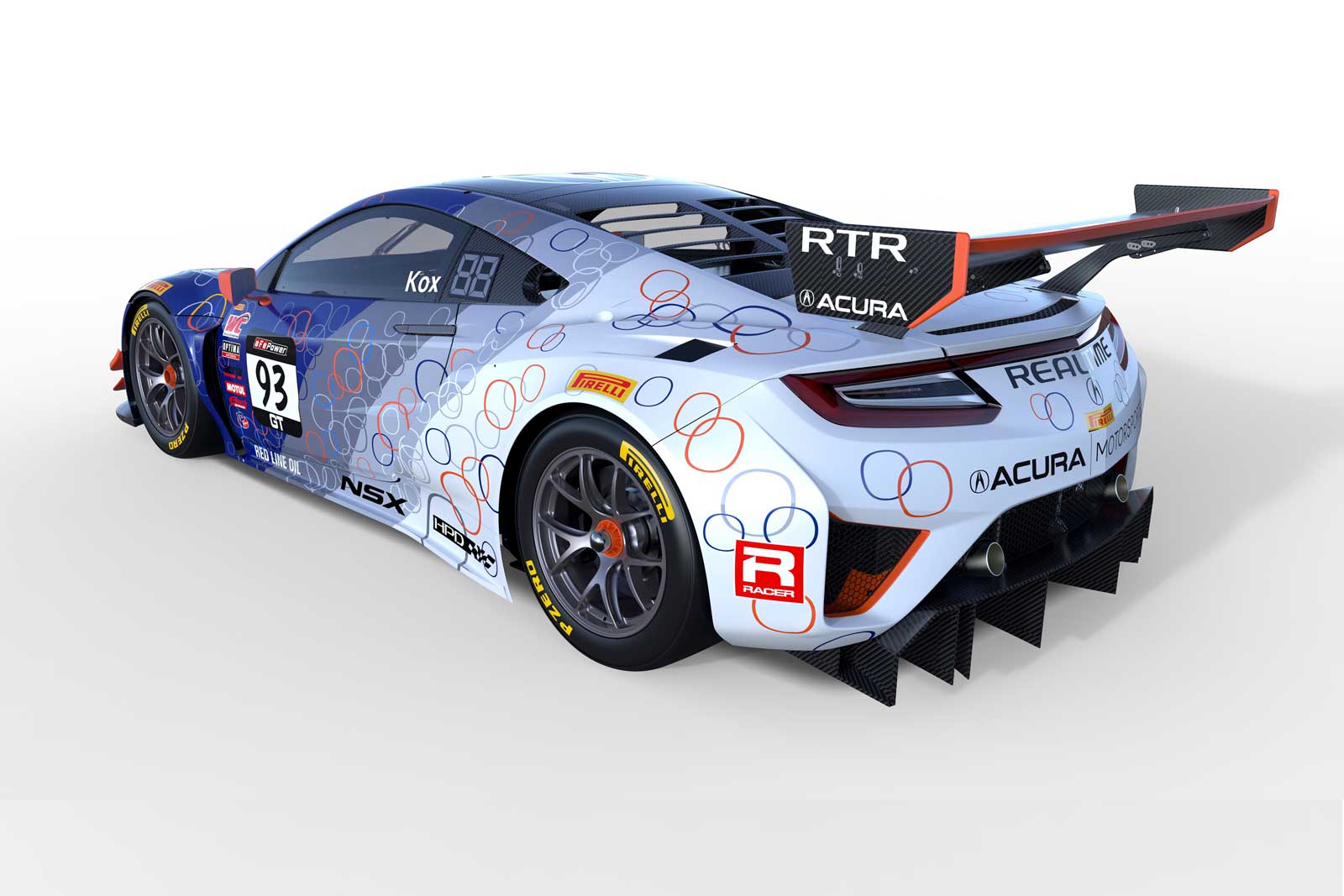 About the Acura NSX
Created to bring a new sports experience to the supercar segment, the next-generation Acura NSX challenges conventional beliefs about supercars, with cutting-edge and world-first technologies. Much as the first generation NSX did a quarter century ago, the 2017 NSX breaks the mold through a first-of-its-kind Sport Hybrid Super Handling All-Wheel Drive™ power unit, a multi-material body structure, advanced aerodynamics and a cockpit that supports performance driving on every level without sacrificing comfort. The 2017 Acura NSX is the only supercar designed, developed and manufactured in the U.S. with production exclusively at the Performance Manufacturing Center in Marysville, Ohio.

About Acura
Acura is a leading automotive luxury nameplate that delivers Precision Crafted Performance, an original approach to technology and design that creates a new driving experience. On March 27, 2016, Acura celebrated the 30th anniversary of its launch as the first luxury nameplate from a Japanese automaker.